If you've enjoyed the recent rally in  the broad market, or in some specific stocks you own, congratulations!  If you've suffered through the performance of the gold mining sector, or some specific  gold mining stocks you, you have my condolences.  In either case, please keep one thing in mind.

You're probably not as smart or as stupid as your investments make you feel.  All of us can see good reasons to be puzzled about the broad market rally.  Many of us see compelling reasons for gold, and the gold miners, to push higher.  It's worth remembering that famous Keynes quote: "The market can stay irrational longer than you can stay solvent."

And "solvent" isn't only issue.  A close friend recently invested heavily in the Market Vectors Gold Miners ETF.  I have something similar, the Fidelity Select Gold Portfolio.  I'd rather own GDX, but that's not an option in my 403B.)  He got in just in time for a 15% jump in price, followed by a drop to 21% below his purchase price--then he dumped almost half of his holding.

If you're holding something similar, or anything in the sector, please think carefully before you make a move.  The gold mining stocks may be much closer to a bottom than to a top.  Here's what Jeff Clark has to say in DailyWealth.  Spoiler alert!  The title includes the words "the market's single-best value today."


"We also have the potential for one heck of a buy signal coming from the gold sector bullish percent index (the BPGDM). 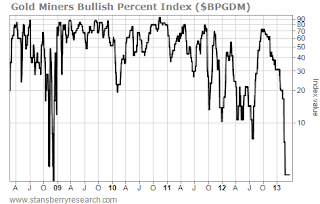 The BPGDM is so oversold, it's almost mathematically impossible for gold stocks to get much cheaper. The percentage-based index can range anywhere from zero to 100. On Wednesday, it closed at 3.33. Take a look...

The only time the BPGDM was more oversold than it is now was back in October 2008, when the index dropped to zero. The HUI was 100% higher just two months later. And within one year, it had gained 230%.

We'll officially get a buy signal from the BPGDM when it turns higher from here. Normally, I'd wait until we get that signal before buying gold stocks. But given how oversold the sector is, gold stocks could easily move 10%-15% higher before the BPGDM turns up from here. And we don't want to wait for that to happen." 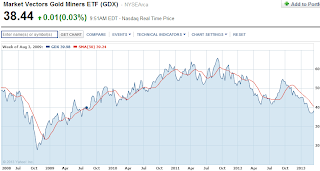 Please take another look at that chart, and compare what you see to the one to the right.  See what happened the last time the BPGDM was this low.  Also note that GDX is below its 50 day moving average and consider what is most likely to follow.

By the way, Clark has a great reputation not only as an investor in gold stocks, (frankly, it hasn't been that tough in the last decade), but also as a trader--which is considerably more challenging.

If you haven't read his whole article, please do!  He's got a couple more charts just as compelling as the one above.  And if you're thinking of dumping gold stocks now, you might want to think again.
Posted by Randy Lions at 10:13 AM
Labels: 50 day moving average, BPGDM, bullish percent indicator, dailywealth, ETF, fidelity select gold, gdx, gold miners etf, gold mining stocks, Jeff Clark, market bottom, market top